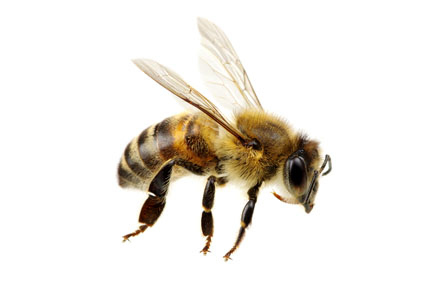 There are over 200 types of bumble bee and in the first warm days of Spring you may see the large queens flying busily about the early bulbs and flowers. These large slow bees are searching for nectar and pollen to turn into food for their newly hatching brood. The queen will locate a suitable place to build her nest, and they look for a variety of sites.

Most common are the leaf litter in the bottom of hedges, a cool dark place under a large stone or under the wooden floor of a shed or other building. Because the bumble bee does not live in a large colony the nest is usually little bigger than half a grapefruit even in the busiest days of high Summer. When the drones hatch in mid Summer the sudden increase in bee numbers frightens people who are nervous about insects. But remember these drone bees have no sting and they won’t swarm.

The queen begins a new nest with a ball of pollen and wax into which she lays just a few eggs at a time. When the eggs hatch they try to eat their way through the pollen reserve but the queen continually adds to the pollen and wax sealing them in. Eventually the grubs pupate and the queen spins a bright yellow cocoon from which the grubs emerge a few days later as fully grown worker bees.

As soon as they dry their wings the worker bees begin work to support the colony and their queen. She continues to lay eggs but as it takes more and more of her time the pollen and nectar collection is delegated to the workers, this type of co-operation continues throughout the late Spring and Summer until the nest has reached the right size for its species. At that point the queen lays eggs destined to become next years queen bees as well as drones or male bees.

The drones once hatched leave the nest and live independent lives, their purpose being to mate with the young queens to ensure the survival of the species. Unlike honey bees the young bumble queens will continue to live and work in the mother colony for the remainder of the Summer and Autumn. The first sharp drop in temperature and frosts the old queen, her workers and the independent drones will die. Only the newly mated queens will survive in hibernation to begin the cycle again the following Spring.

The first port of call would be to your local beekeeper for Bees.