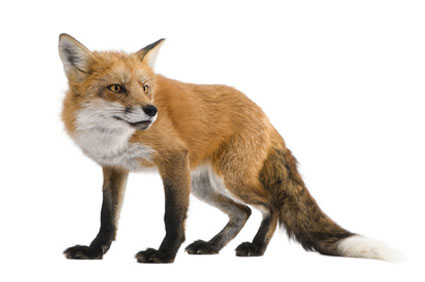 So how do you know if you have them?
Red foxes live around the world in many diverse habitats including forests, grasslands, mountains, and deserts. They also adapt well to human environments such as farms, suburban areas, and even large communities. The red fox’s resourcefulness has earned it a legendary reputation for intelligence and cunning.

Red foxes are solitary hunters who feed on rodents, rabbits, birds, and other small game—but their diet can be as flexible as their home habitat. Foxes will eat fruit and vegetables, fish, frogs, and even worms. If living among humans, foxes will opportunistically dine on garbage and pet food.

Like a cat’s, the fox’s thick tail aids its balance, but it has other uses as well. A fox uses its tail (or “brush”) as a warm cover in cold weather and as a signal flag to communicate with other foxes.

Foxes also signal each other by making scent posts—urinating on trees or rocks to announce their presence.

In winter, foxes meet to mate. The vixen (female) typically gives birth to a litter of 2 to 12 pups. At birth, red foxes are actually brown or gray. A new red coat usually grows in by the end of the first month, but some red foxes are golden, reddish-brown, silver, or even black. Both parents care for their young through the summer before they are able to strike out on their own in the fall.

Red foxes are hunted for sport, though not extensively, and are sometimes killed as destructive pests or frequent carriers of rabies.

Problems caused by Foxes
Foxes in London Essex and Hertfordshire often cause problems by raiding bins, eating pet food and killing family pets.  The same problems occur in the bigger cities of Hertfordshire like Watford or Stevenage but in rural Hertfordshire foxes can cause problems by killing livestock like chickens.  Foxes can also be very noisy and spread disease. There have been rare occasions where foxes have entered homes and attacked babies.

Identify a Fox problem
Foxes are most active at night and can often be seen crossing roads or gardens. An overturned bin is often a sign of a fox but sometimes the first sign of them is when pets are found dead or missing, particularly rabbits or chickens.

Securing perimeters and sealing and protecting food sources is often the first step required.  Making sure animals are safe is also a priority.  There are a number of ways that foxes can be dealt with and your pest controller can advise on and carry out the appropriate methods.

As with all our treatments, the pest control technician will leave a report with you with details of any treatments and recommendations.  If a follow up visit is likely to be needed, our technician will arrange a suitable date and time with you. Generally this will be about a week or two later and sometimes a second treatment is required.