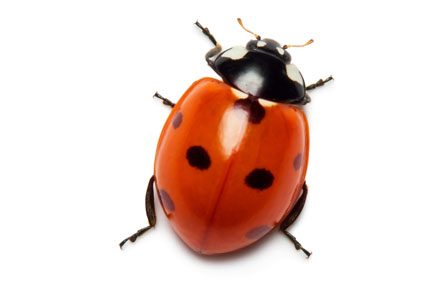 The Harlequin was introduced from Asia to North America in the 1980s to control aphids that were feeding on crops.  However, the ladybird quickly spread across the United States to become the most common ladybird there.  Its arrival in Britain in 2004 was probably accidental though it might have blown over in strong winds following its spread across Europe where it was introduced from North America, again for aphid control.

Over 100 different colour patterns have been recorded which makes it difficult to identify, especially from the Seven-spot ladybird, which is also variable.

Unlike most other ladybirds, the Harlequin doesn’t stick to one type of food. Once it has finished feeding on aphids in the crops it then turns its attention to other ladybird eggs and larvae and even the eggs and caterpillars of moths and butterflies. The main reason Harlequin ladybirds pose a threat to our native ladybirds is that they have such voracious appetites that they easily out-compete native ladybirds for food. It is almost certainly the reason why our Two-spot Ladybird is now so scarce.

Although they are not dangerous to humans they do hibernate in large numbers in houses and other buildings. There are cases of tens of thousands of ladybirds being found in homes during the winter. In the spring the ladybirds become active again and look for a way out of the house.