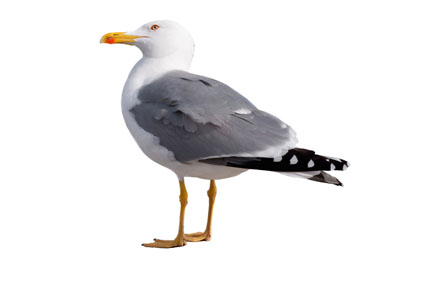 Description
These birds are large to medium in size with white or gray feathers. Depending on the species, gulls are between 11 and 30 inches in size. Many species have black markings on their heads or wings. Their bills are stout, strong and slightly hooked and their feet are webbed. Their wings are long and pointed, having a wingspan of 3 to 4 feet.

They are closely related to terns and distantly to auks. Coloration of many seagulls is seasonal or may change as they mature. During the breeding season, generally adult seagulls have white heads. These include herring gulls, great black-backed gulls, western gulls and glaucous-winged gulls. However, some species, such as Bonaparte's gulls and Franklin's gulls have dark-colored hoods during the breeding season. During winter, gulls with white heads develop streaks on their head, while hooded gull species tend to have a dark spot on the head.

Seagull Habitat
Gulls, more often known as seagulls, are seen in coastal areas on cliffs, coastal towns and low-lying coastal regions. However, they are also seen inland, around dumpsters and parking lots. Gulls are comfortable living inland or along the shore, as long there is food supply in the vicinity. Seagulls are primarily scavengers, but they eat fish, shrimps, prawns, small birds and mammals, eggs, crabs, carrion, grains and edible rubbish. The birds prefer scavenging for food around dumpsters and fishing harbors rather than catching fish at sea.

Breeding
Seagulls lay just a single clutch of eggs once a year. The bird nests in large colonies, with each gull laying between 2 and 3 eggs. The incubation period varies from species to species and generally both parents help to incubate the eggs. Nests are made from stones, sticks and twigs and are built on the ground. The young stay close to the nest for five to six weeks after hatching, and then they are ready to learn scavenging and hunting skills from their parents.

As with most of our Seagull control treatments, we usually carry out a full inspection this allows us to make sure any actions we take are successful. Our fully trained pest control technician starts by talking to you about the problems you are having before assessing the situation.  Please be aware that the pest controller will often need to inspect other areas and not just the visible source.

There are various ways our pest controllers can deal with Seagulls including humane methods such as netting and anti perch spikes.

As with all our treatments, the pest control technician will leave a report with you with details of any treatments and recommendations.  If a follow up visit is likely to be needed, our technician will arrange a suitable date and time with you. Generally this will be about a week or two later and sometimes a second treatment is required.