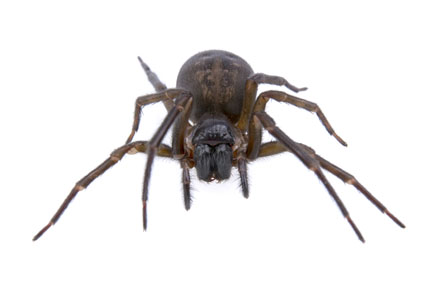 Any arthropods that share the same characteristics as spiders are known as arachnids. Other arachnids, or spider relatives, include ticks, daddy-long legs, scorpions, and mites.

The difference between spiders and insects is that all spiders can produce silk throughout their lifetime. However, just a few insects can produce silk, and then at only certain times during their life. Spiders use silk to build webs and other types of snares and egg cases. Spiders are predators, feeding mainly on insects.

Spiders are considered beneficial because of the large number of insects they prey on, including a number of pest species. All spiders have venom and are therefore venomous. However, most spiders are harmless to people. They are very shy and usually remain hidden in undisturbed areas. Many are active only at night. They are not aggressive and they will try to escape when confronted. Few spiders bite, even when coaxed. Fortunately, the bites of most spiders are less painful than an average bee sting.

Common House Spiders build their tangled webs in secluded locations, which can also house eggs contained in spherical sacs. Their behavior on webs is quiet and efficient. They are generally dull in appearance, with patterns of brown shades, often giving a vague spotted appearance. Their average body size is a quarter-inch (9 mm) long, but they can be an inch (2.5 cm) or more across with legs outspread. A male and female often share the same web for longer periods, and several females often build their webs in close proximity. However, several females will fight each other on an encounter.

This species can live for more than a year after reaching maturity. Each egg sac contains from 100 to more than 400 eggs, with a single female producing up to 17 egg sacs. The hatchlings remain in the mother’s web for several days.

Insect monitors and vacuuming the webs are the normal treatment for Spiders. In houses we normally need to treat the kitchen and the infested areas where the Spiders may have originally found their way in.