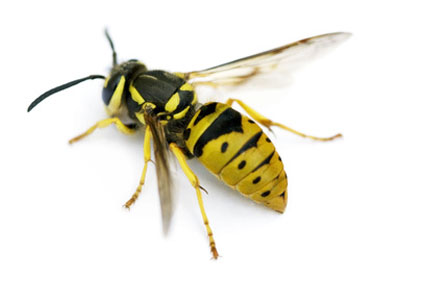 So how do you know if you have them?
A wasps nest is very easy to spot. Wasps will normally make nests in air vents, in lofts, on roofs, under guttering in the eaves and under flat roofs to name but a few places. If the wasps are going in and out of particular hole on a regular basis, it is likely you have a wasps nest.

Wasps also visit dustbins, waste depots and dead animal bodies which can lead to the spread of disease and contamination of foodstuffs.

As a general rule, you should not attempt to treat wasp’s nests by yourself. It is likely to be difficult and potentially dangerous. On no account should you remove a nest from the roof space. This should be carried out by a professional pest controller. The main hazard is the risk of ‘anaphylactic shock’ which can arise from even a single wasp sting, which may lead to death.

The wasps can cause alarm when present in large numbers and if the nest is in a place where the individuals from it interfere with humans they can inflict painful and sometimes dangerous stings.

Habits
The wasps are colonial insects living in social groups. Each colony is established in the spring by an over wintering queen which makes a smaller starter nest from paper made by itself by mixing wood and saliva.

The colony grows throughout the summer and the nest with it. Many thousand individuals are often to be found associated with each nest, with the workers feeding on nectar, sweet materials and at certain times insect larvae and other animal pieces.

The colony develops males towards the end of the summer to mate with the presumptive queens which when mated over winter start a new colony the following year.

How do we control wasps ?
Wasp’s nests can be controlled by applying an insecticidal dust into the entrance of the nest at high pressure. Once this has been carried out the wasps will distribute the dust naturally around the nest, thus killing the queen and the rest of the wasps. This will normally take about twenty four hours.

Problems caused by Wasps
Wasp stings are not just unpleasant but potentially lethal as there is a risk of ‘anaphylactic shock’ that can arise from even a single wasp sting.  Dustbins, waste depots and dead animal bodies are popular with wasps and can lead to the spread of diseases and the contamination of food sources.

Identify a Wasp problem
Wasp nests are usually easy to spot and are found in many buildings throughout London Essex and Hertfordshire. They'll normally make nests in lofts spaces, roofs, under guttering, in air vents and many other places. You can locate a nest if you see wasps going in and out of a hole on a regular basis. You should not attempt to treat wasp’s nests by yourself it can be difficult and potentially dangerous. Never remove a nest from a  roof space, this must always be carried out by a professional pest controller.

As with most of our pest control treatments, we usually do one visit. Our fully trained pest control technician starts by talking to you about the problems you are having before assessing the situation.  Please be aware that the pest controller will often need to inspect other areas and not just the visible source.

Dusts are the normal treatment for Wasps. In houses we normally need to treat infected areas where the wasps may have originally found their way in.

As with all our treatments, the pest control technician will leave a report with you with details of any treatments and recommendations.
We are a leading pest control company working in and around the Hertfordshire area, using the latest techniques to ensure your pest problems are completely eradicated.
Contact Us
Get in touch with us
Fill out the form below for a quick quote